You are the light of the world. A city on a hill cannot be hidden. (Matthew 5:14)

In June of 2008, we celebrate the 50th anniversary of Rockford Reformed Church, and reflect on a legacy etched with faith, mindful that, "Unless the Lord builds the house, its builders labor in vain." (Psalm 127:1)

In the winter of 1957, three Rockford families attended different Reformed churches located in Grand Rapids. There was no Reformed Church in Rockford at the time, and the distance was inconvenient at best. So, how did this church, which currently includes over 225 families, begin? According to our founding members, it started with one…

"Many of you have heard the story about the three families starting Rockford Reformed Church, but what you don't know is that it all began with one (who acted) under the conviction of the Holy Spirit," said Ray Kunst. Alluding to Jesus' Parable of the Sower, he added, "The seed was planted and fell on fertile ears. One day a lady entered my flower shop in Rockford. She introduced herself as Lee Carter, and said she had a question. I naturally thought it would be about flowers, but it wasn't."

Instead, she asked him about church and a conversation ensued. Both attended a Reformed church in the Grand Rapids area – Ray at Aberdeen Reformed, Lee at Grace Reformed. They agreed the distance was difficult on winter roads, but there was no closer option within the church denomination.

Lee suggested, "I think we need a Reformed witness in Rockford."

Ray agreed. He told her he knew Gordon and Carol Knox, who attended Knapp Reformed in Grand Rapids, and would talk with them about it.

At the time, Gordon sold advertising for the town's local paper, the Rockford Register, and stopped in weekly at Ray's Rockford Flower Shop. When told about the idea, Gordon was so intrigued, he offered to place an ad in the paper to spark local interest for the church.

Next began the search for a place to hold services. The school turned him down flatly. He then inquired of the American Legion Post, and was nearly turned down as well, but one man "went to bat" for them: Max Wingard, a legion-member, postman, and devout Catholic somehow convinced the others to rent the hall.

On May 31, 1957, six families -- Mr. & Mrs. A. Blouw, Mr. & Mrs. J. Carter, Mrs. F. Davis, Mr. Gringhuis, and Mr. & Mrs. G. Knox -- met with Ray and Thelma Kunst at their home on Elizabeth Street in Rockford. With guidance from Rev. Kik, they began the Rockford Reformed Church, and elected the first church board, with Ray Kunst as chairman, Gordon Knox as treasurer, and John Carter as Sunday school superintendent.

Two mornings later, on June 2nd at 10:00 o'clock, the first worship service was held at the Rockford American Legion hall. The following is an excerpt from the first church bulletin:

"On this Lord's Day the Reformed Church in America begins a witness in this community. We welcome all who worship the Lord with us this day and extend the right hand of fellowship in the name of our Lord and Savior Jesus Christ."

Thirteen people attended that first service led by Rev. John Hommerson, a part-time minister, who would frequently preach throughout the first year and lead Wednesday prayer meetings that fall. That first year prayer meetings, consistory, and congregational meetings were held in homes. On Sundays when the American Legion scheduled dinners in the hall, church services were held at the Rockford Library instead.

Lee (Carter) Harvey recalled getting the word out. "We needed more publicity, and Gord, bless his sweet heart, printed off flyers. We went around to (each) lake district in Rockford and passed (information) out to every cottage."

Two Seminary students who frequently preached that summer, Larry Doorn and Gordon Webster, and the Grand Rapids Senior Christian Endeavor Society (under the direction of Rev. Douma that fall), helped to distribute literature. 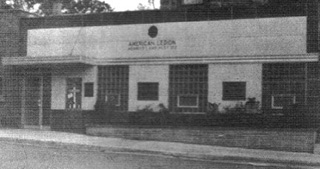 Their efforts brought results, and Carol Knox admitted, "We would never have made it without the financial help of cottagers who attended that summer." And of the work involved, she said, "We had to set up for each service, clean up from parties held at the hall the night before. Floors were often sticky from spilt beer. We had to wipe the piano keys clean, spray air freshener, and air out the place before morning church services."

One year later, on June 10, 1958, Rockford Reformed Church was officially organized by the Classis of North Grand Rapids as a congregation of the Reformed Church in America. Rev. David TerBeest, President of the North Grand Rapids Classis and chairman of the Church Extension Committee, presided over the evening service that hot summer day. According to the "Dedication Services of Rockford Reformed Church" 1960 booklet, during that service "twenty-two communicant members were transferred by letter from a number of churches, eight were received on confession of their faith, (there were) two adult baptisms and five infant baptisms, representing a total of fourteen families at the time of organization." The congregation had grown to include thirty-two communicant members, and was served that summer by Allen Boeve, a Western Theological Seminary student. Rockford Reformed worship services would continue to be held at the old American Legion hall near the southwest corner of Courtland and Monroe until April 24, 1960. 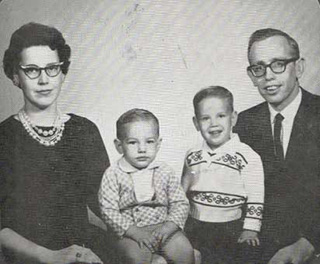 At the congregational meeting in December of 1958, a decision was made to extend a call to Donald W. DenHartog, a senior of Western Theological Seminary, to become the pastor of Rockford Reformed Church. He accepted, and the church rented an apartment for his family in a house located on the corner opposite the American Legion Hall. Rev. DenHartog graduated in the spring of 1959, and shortly after, on June 20th, was installed as the first pastor. 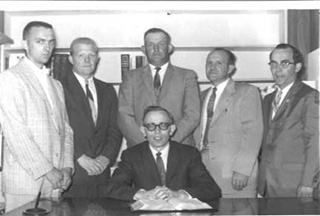 In March of 1958, the first building fund offering totaled $14.00. The first church to donate to the fund was Aberdeen Reformed, but Fourth Reformed and Seventh Reformed donated large sums, as did several members. The Classis of North Grand Rapids gave $10,000. Later, loans would be taken out from the Board of North American Missions ($15,000), Western Theological Seminary ($5,000), and from one church member ($2,000).

A suitable building site was found, and representatives from the Classis came to look over the location. They "gave their approval with one exception, that…an additional 50-foot wide lot" be purchased. The total price for the three lots was $6152.   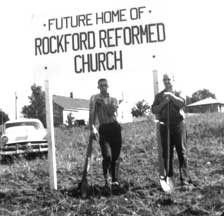 On August 20, 1959, the land was purchased from W. Harold Burch, Cecil M. Burch, and Donald H. Burch by the Classis of North Grand Rapids and given to the congregation. The church bulletin announced, "…the land on 11 Mile Road officially became ours…Let us all pray, give, and work so that our church building may (become a) reality…"

Groundbreaking for Rockford Reformed Church was held during the Sunday school hour on October 11, 1959. The brisk autumn wind wouldn't break the spirit of those gathered on the hill as the first shovel of soil was lifted. It was a moment of answered prayer and a testimony to what can result "when one works with God". Featured were greetings by Rockford Mayor Ploeg and Chester Brandt of the Classis Extension Committee. Rev. DenHartog officiated with participation by elders George Posthumus, John Carter, and Ray Kunst. The event included prayer, the reading of Psalm 124:1-8 and Psalm 127:1, and concluded with the congregation singing the doxology. 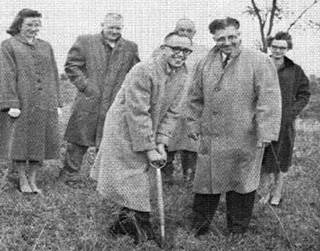 There was always work to be done, but church members always rose to the occasion. "Every night and Saturdays, the men would unload materials for the church kit as it came in on the train. They stored it in the barn behind the house rented for the pastor's family," said Carol Knox. 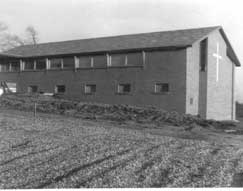 Jim Bolhouse and Bernard Bronsink were the carpenters who built the main structure of the church. Other men of the church worked diligently in their free time to help with construction, while the women provided meals. Thanks to their combined efforts, building costs were kept within budget. 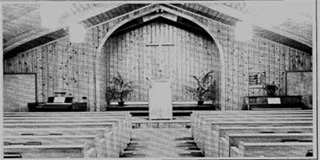 Interior of the new church

On May 1, 1960, the first service was held in the new church sanctuary. The people were "thrilled and thankful … in spite of getting muddy shoes."

Dedication Week began with the formal laying of the corner stone on June 26, 1960 (delayed due to winter weather). The cover of the "Dedication Services" booklet reflected the sentiment of the congregation: "Enter into His gates with Thanksgiving, and into His courts with Praise." (Psalm 100: 4) 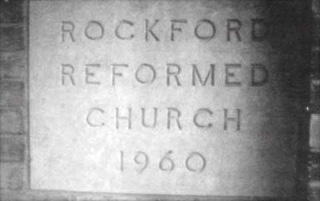 A special worship "Service of Dedication" that Tuesday featured the Presentation of the Keys from builder Jim Bolhouse to the congregation, represented by Building Committee chairman, Ray Kunst, with a formal acceptance by Rev. DenHartog.

The Sunday evening service on July 3rd concluded the weeklong celebration with the "Service of Consecration," and Rev. DenHartog read the scripture passage about Solomon's dedication of the temple: "Praise be to the LORD, the God of Israel who with His hands has fulfilled what He promised…" (II Chronicles 6:4)

The original church building, designed by Creative Buildings, Inc. of Urbana, Illinois, was described in the Dedication Services booklet:

"Our new church is a recent innovation in church architecture. The basic plan is called "The Church in the Wildwood." The inside of the church is wood, mostly cedar and fir. The outside has brick facing. The walls are of poured concrete to give solidity and durability. The back area of the church contains living quarters for the minister. This space will eventually become part of the church and will be used for Sunday School rooms. The approximate cost of the entire structure was only about $40,000. Eventually a steeple will be put on the church and will be lighted so as to witness to the community and to the passerby that here is a church building dedicated to the worship of God."

By that fall, Sunday services would attract up to 80 people weekly, according to a November 20, 1960, Grand Rapids Press article by Ralph Truax, who concluded that "steady growth will almost surely tax the institution to capacity in the near future, and expansion plans are being considered." 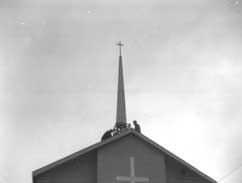 In 1967 ground was broken for the church parsonage. Rev. Larry Grooters and his family would be the first to live in the ranch-style home. In mid-December, 1978, the parsonage was "seriously damaged" by an electrical fire that cost approximately $26,500 to repair. Thankfully no one was injured. The parsonage was restored and improved, then used for several years before it was sold to an individual and moved to a new location in June of 2006.

The three following photos show the addition to the original structure, completed in 1979. Changes included reversing the sanctuary from facing west, to east. Total cost for the project was $101,000, plus "countless hours of labor and gifts" by congregation members who faithfully attended weekly work nights and did whatever was needed. The first worship service in the remodeled sanctuary was held on Palm Sunday of 1979. 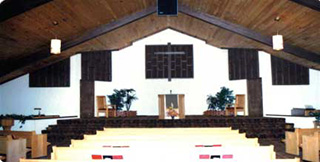 Sanctuary after the 1979 addition

Groundbreaking for an educational and office wing occurred on May 3, 1987. The 3,200 square foot addition added ten classrooms plus an elevator at a cost of $129,000. That addition was dedicated on September 27, 1987, just in time for the new Sunday school season, and due to "the tremendous generosity and sacrificial giving on the part of members of the church…(was) debt-free." 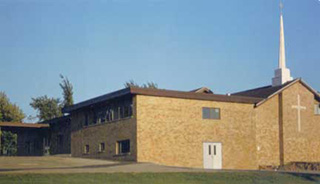 Five years later, on April 24, 2005, another groundbreaking ceremony was held. The new Family Life Center would include a gym, kitchen, nursery, youth room, classrooms, and elevator, for a cost of $1,300,000. It was dedicated on November 6, 2005.